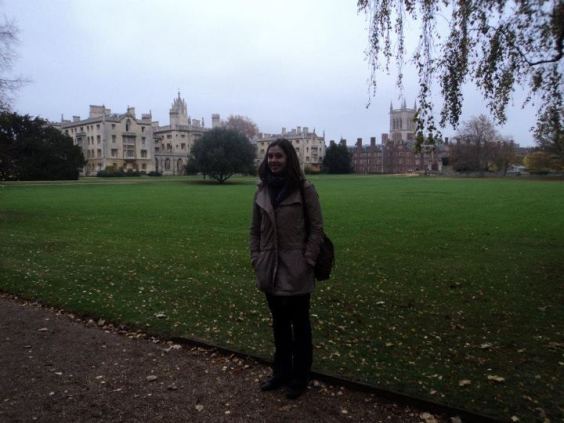 Ok so Cambridge isn’t exactly (or even roughly) in London. But it is easily accessible from London, even for a day trip (which I would highly recommend if you are in London and want something a little different to do). I visited it twice; once on a day trip and once over a weekend. I had been told Cambridge was a beautiful place but I didn’t really realize how true that was until I arrived. You just want to hop on a bike with a basket up front and peddle along the cobblestone paths in between all those ancient colleges. I even saw Stephen Hawking, truly the most famous person I had seen since moving back to England. We visited the Fitzwilliam museum, blagged our way into one of the more exclusive colleges to take a look around the grounds, and watched the punts banging into each other on the river. I felt rubbish at the time, suffering from what felt full blown flu (but what was probably just a bad cold) but needed a break out of crappy London life and it was a breath of fresh air (literally). Plus, it was fun to see firsthand that sense of burgeoning intellectualism that seeps out of everyone’s pores. I love the idea of being a true Cambridge undergrad at a very serious college with proper traditions, wearing my gown to lectures and having small tutorials in a professor’s study. But in reality I’m not smart enough, and like my friend said “around exam time people walk around with crazy eyes. It’s scary.”

Yes, I love the tube. I make no excuses that I have the whole map memorized in my head and I love nothing more than plotting how I can get from one stop to another in the quickest time. Although I hate commuting on the tube, and doing so sucked all the money that I had, I did enjoy it as a form of transport. Madness, you might say. But I just found it fun. Even when the whole thing shut down, I loved ducking and weaving between the crowds of angry people, plotting the four different changes I had to make to get to my destination. I loved hearing all of the names of the famous stops, like Abbey Road and Hyde Park and Leicester Square. On the flip side, never ever go near London Bridge or Bank station at rush hour. In London Bridge I was very nearly thrown off the platform by a surging crowd of people. In Bank some moron in a suit elbowed me in the back of the head and refused to apologise. Stay away if you can!

8. How the other half live

One upside to my job was being able to go out in some swanky venues in town (often without having to pay). Our parties were often in trendy underground bars in Covent Garden and when a spate of people had leaving drinks, we always went to Jamie Oliver’s restaurant downstairs for cocktails. One morning as a leaving treat for a team member, we even went to Dean Street Townhouse for breakfast. Here, the waiters wear pristine white shirts, call you ‘Ma’am’ and ‘Sir’, and we had champagne served with our food. The clientele ranged from the sharp suited heirs-to-fortunes set, enjoying a quiet hangover brunch with friends, to the old boys in their favourite booths, eating kippers and reading the morning papers. How the other half live…

After work one dark, rainy, depressing evening, I wandered down to Soho (a few minutes walk away from the office) and picked up my ticket to see Wreckers at the Curzon Soho. Seeing a film on my own might not sound like a big deal, but it was my first solo cinema trip and I was looking forward to it. The Curzon cinema is somewhere I would definitely go to again for nights of film fun: alone or with someone else. My ideal evening would be to head to the gorgeous twinkly-lit bar downstairs to have a pre or post-film glass of wine. People were even taking the wine into the cinema with them (in the obligatory plastic cups, obviously). As someone who has only ever attended the usual big chain cinemas with spotty twelve year olds throwing popcorn and seats sticky from Coca-Cola spills this was a magical change in scenery.

The seats were comfy, with great leg room, and the screening was relatively empty. Plus, Wreckers was amazing. And it had Benedict Cumberbatch in. What more could a girl ask for?

….in China town, with a bunch of great people. I had driven and walked past China town a few times, but unfortunately I was always on my way somewhere else and could only peep down the streets. This time, we were right in the middle on Chinese New Year and it was throbbing with lights and music. All the restaurants and shop fronts were decked out for the occasion and the crowd was huge but friendly. We tried desperately to get into any Chinese restaurant but failed as we had no reservation. We instead found a Vietnamese restaurant (alright not Chinese, but close enough) and stocked up on food and beer. We had a Snog (a brand of frozen yoghurt, don’t get too excited), and ended up in a pub just outside China town drinking the night away. So it wasn’t exactly authentic Chinese, but the atmosphere was fantastic and to be honest we could have been anywhere and I wouldn’t have cared; I was with a good group of friends, most of whom I hadn’t seen since we graduated, and that’s what made it memorable.

What are your favourite things about London? Is there anything you would put on your top 10 list?