When you arrive into a city like Moscow for the first time, its sheer enormity can be terrifying. I find a good way to orientate yourself is to join a city tour. In Munich, I went on a Sandemans New Europe Munich Free Tour which really endeared me to these sorts of walks. Roughly two hours long, they take you round the main sights of interest. As an independent traveller it really helps you start to map out the city in your head. By the end of my trip in Munich, I was able to navigate myself relatively easily around the centre of the city.

After two hours walking around Moscow with a guide I was…still lost. But it did give me a good foundation.

This tour – The Moscow Free Tour – had the added bonus of being done by a local. Our tour guide was a lovely Russian girl who, like a lot of young Russians, came to Moscow to find work and to enjoy city life. Her English was great (especially compared to my two-word meagre Russian abilities), and she gave us a few fun titbits of local knowledge.

The tour starts in front of the statue of Cyril and Methodius – the two gentleman who created the Cyrillic alphabet. Or, as our tour guide, the people we should blame when we can’t understand the road or Metro signs. Our group were a jumbled bunch of backpackers staying in local hostels and older couples on trips with clearly a much higher budget. As we set off down Varvarka Street, our tour guide would occasionally stop and usher us into a tight group to tell us a piece of history. 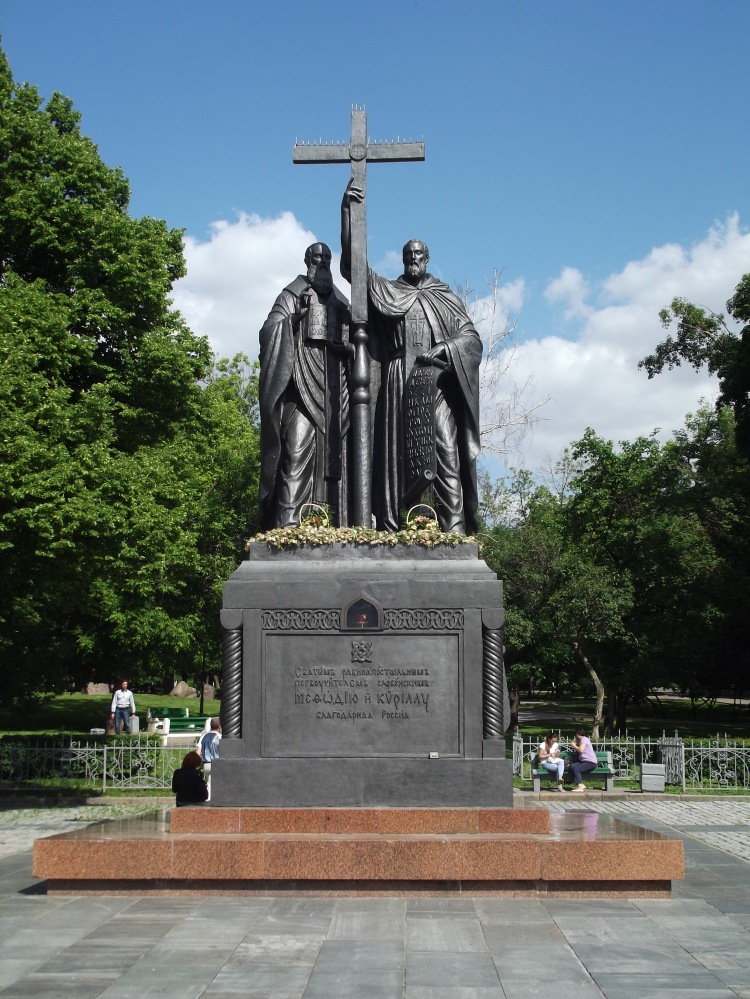 Varvarka Street was so full of old churches and cathedral of different colours it was hard to distinguish them.  In the sun the skyline was a rainbow of multi-coloured domes. Any quick dip into a history book though would paint a picture of a street full of history and significance for Moscow.

As the only Brits on the tour my friends and I were singled out to be shown a particular building; the Old English Court, where the British envoys lived in the time of Queen Elizabeth I. It’s a beautiful building very much of its time and the aesthetic of its designers. 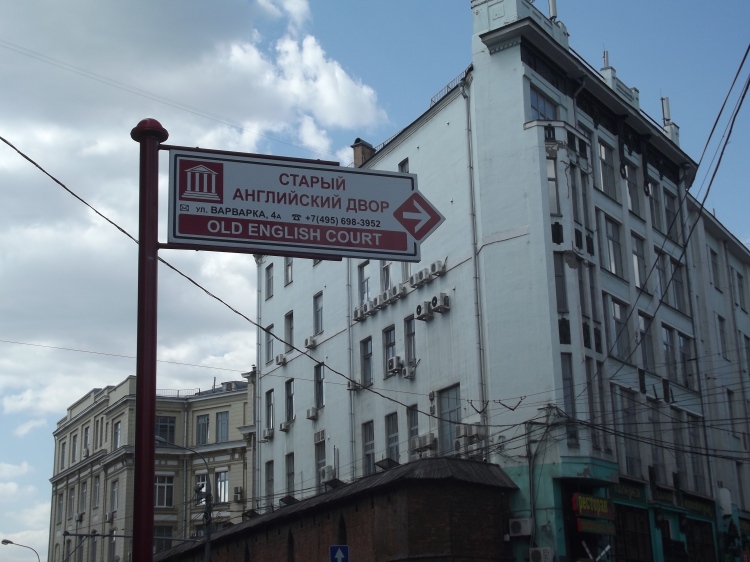 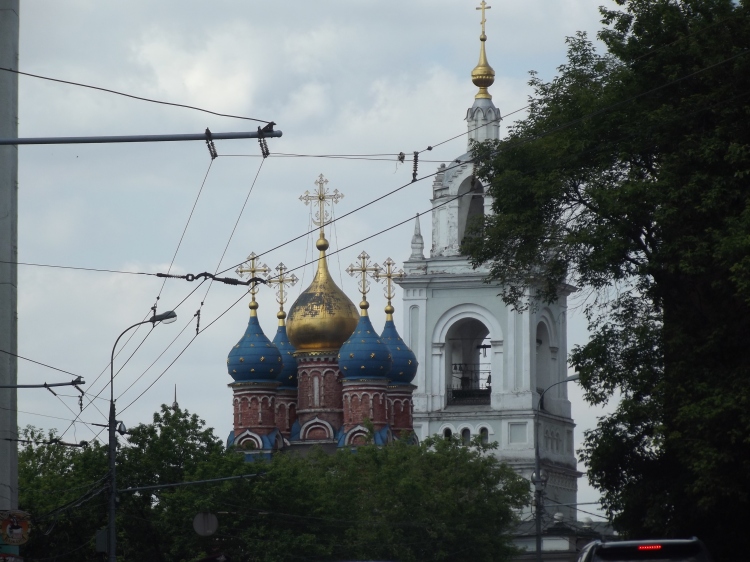 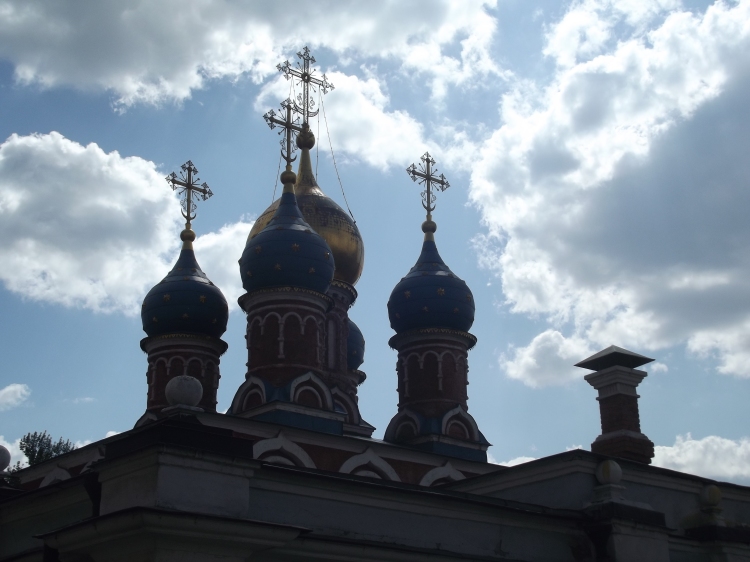 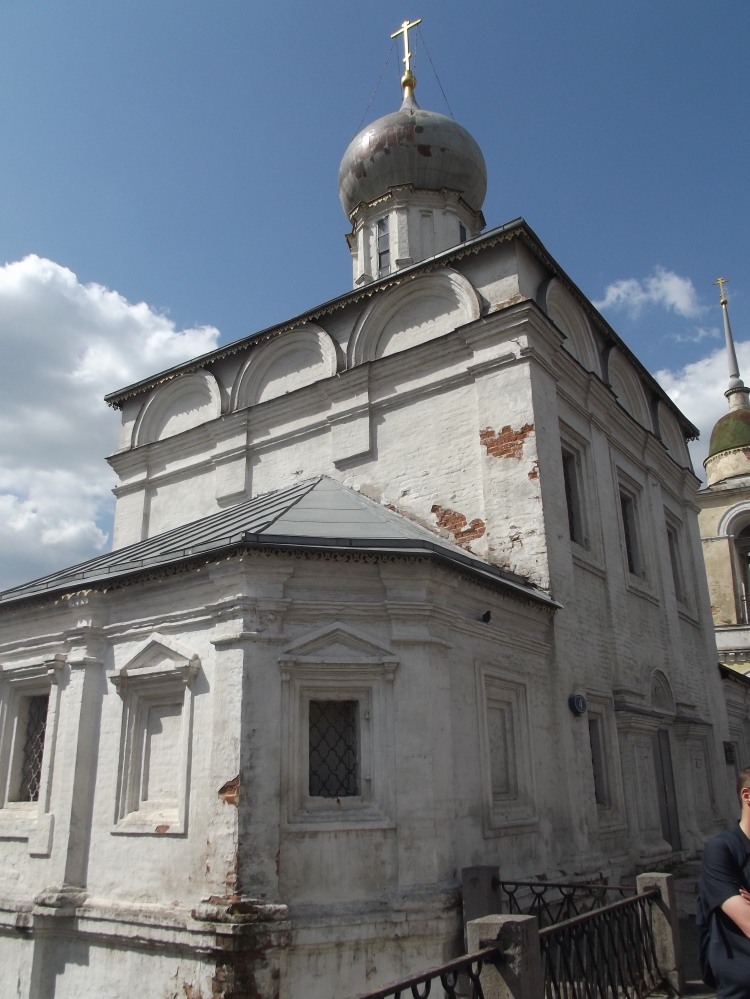 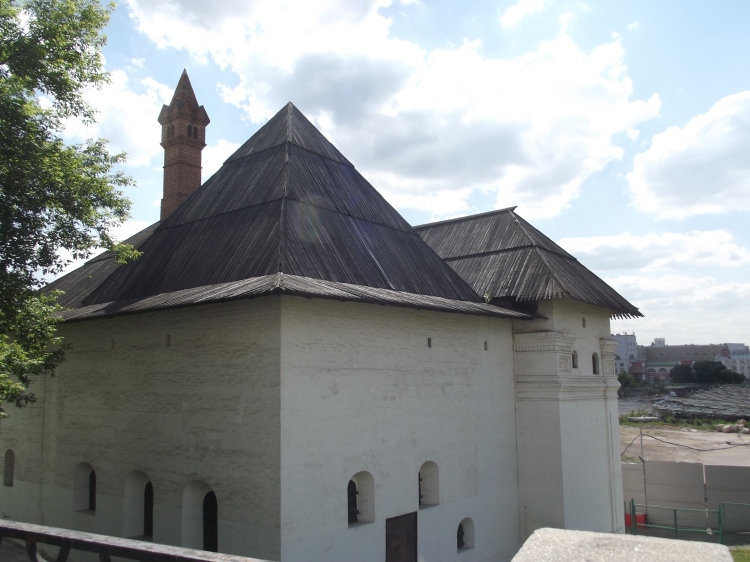 My only regret of my whole Moscow trip was that we didn’t get a chance to enter any of these churches, or explore the Old English Court. I suppose you can’t do everything on a five day trip!

At the end of Varvarka street, the road opens out and St Basil’s Cathedral shines just metres away. And once you reach the grounds of St Basil’s, the huge size of Red Square spreads out ahead. Whilst we were there preparations were underway for Presidents Day, so we weren’t able to walk to the centre of the Square. We were able to skirt the edges, but metal barriers and scowling Russian policeman kept us tourists from stepping too far into Red Square. 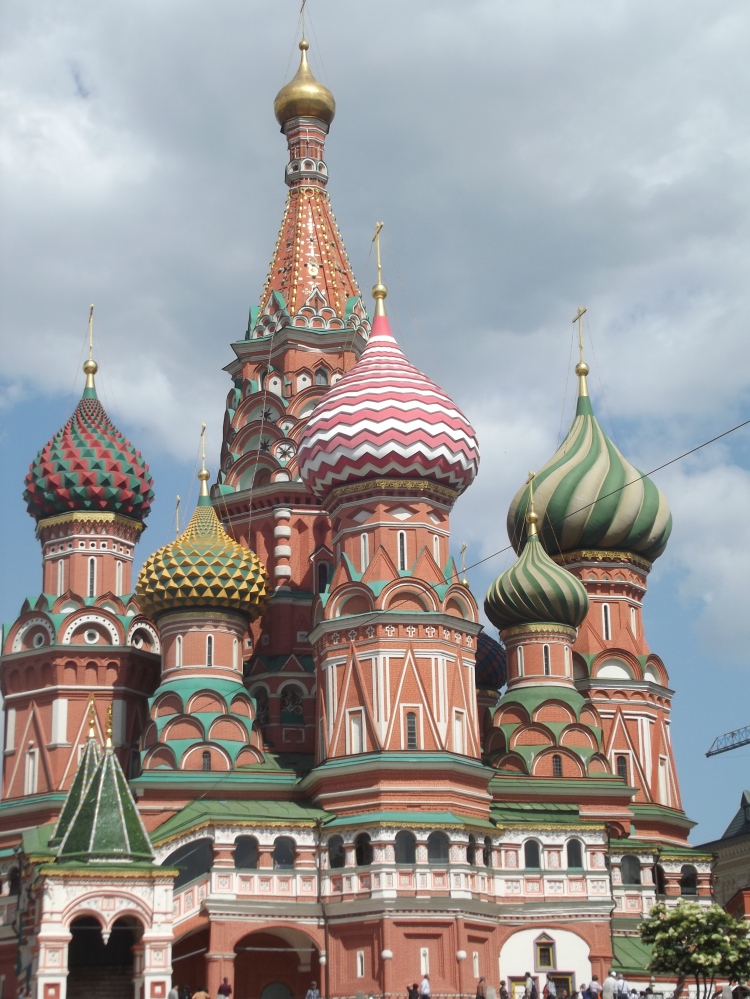 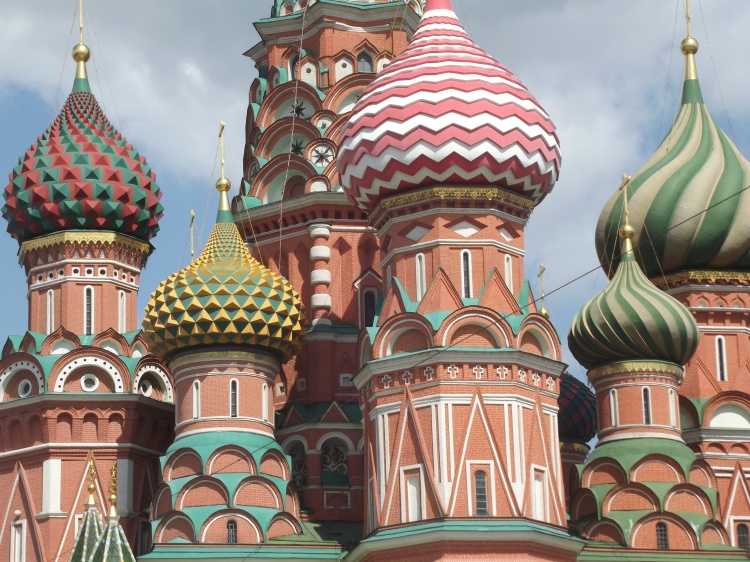 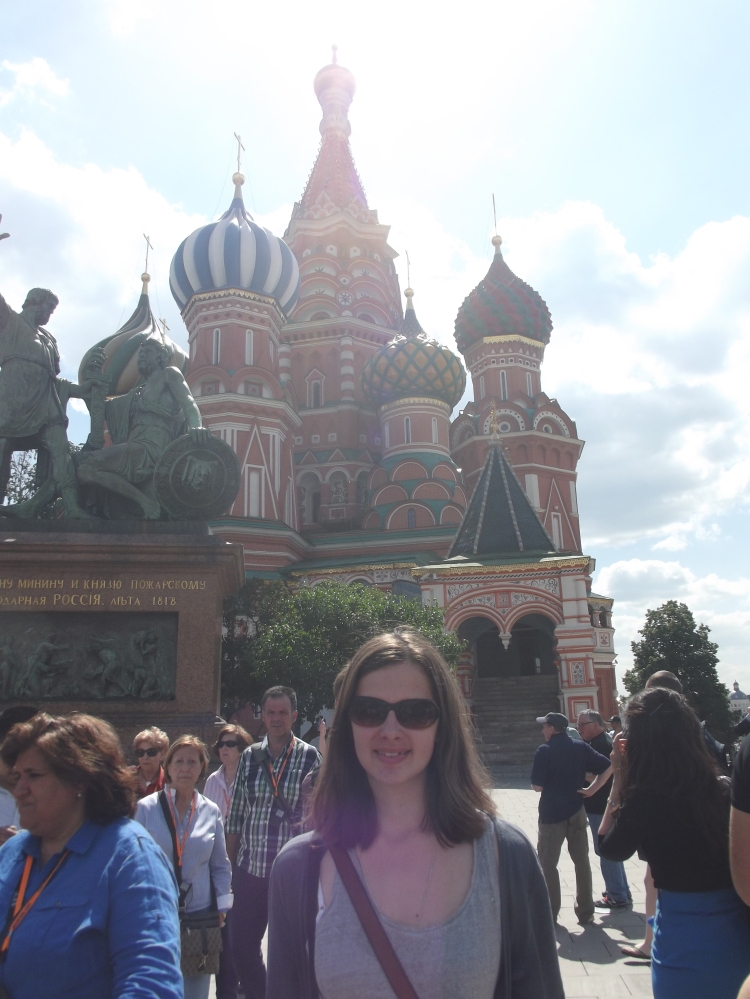 I’ve seen so many pictures of St Basil’s that I couldn’t quite believe I was standing there. If you’ve ever stood in front of an overly-photographed building then you’ll know the feeling. It looks nothing like you expected, yet everything is so recognisable. I had no idea that the colours would be as bright as you see in the photos. In the sun on the day we visited it was like someone had come out and re-painted and polished them just for us.

After time set aside for hundreds of photos, we moved to GUM  – the famous department store. I’ll talk about GUM more in another post, as we revisited it a few times.

Emerging from the other side of GUM gave us a better view of the Kremlin. Like St Basil’s cathedral it seemed quite unbelievable that we were standing there. The Kremlin is quite a terrifying symbol of power. And not a power always used for good. 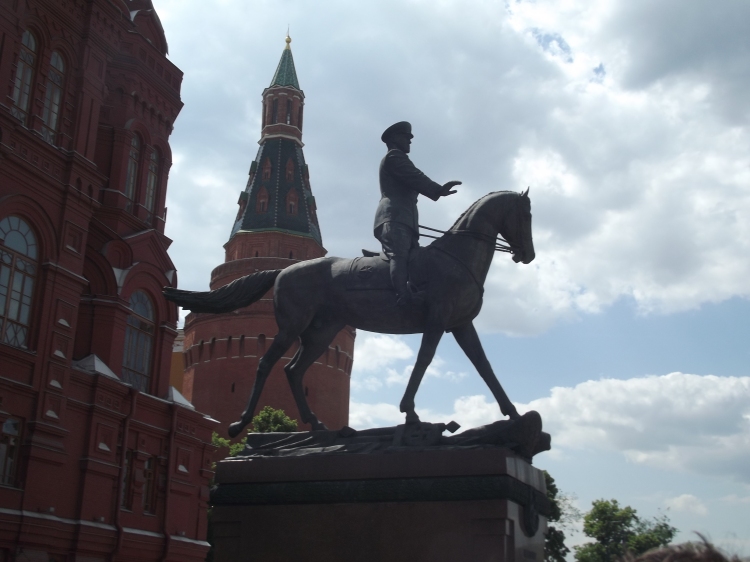 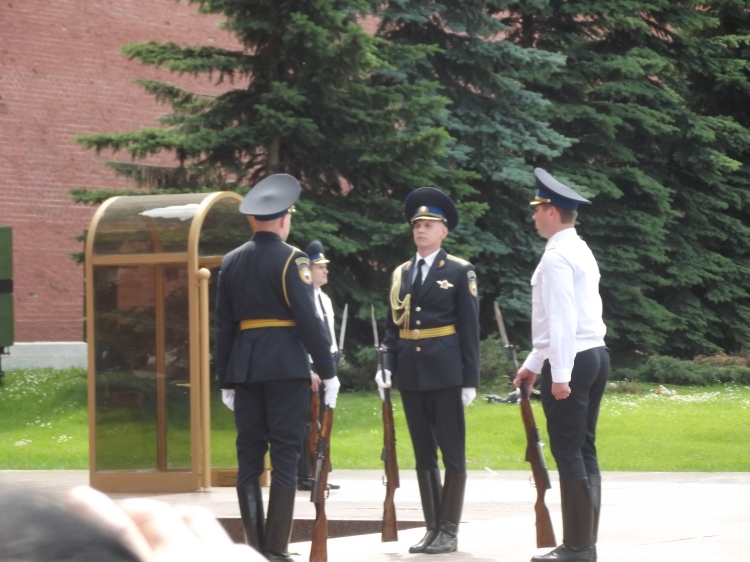 At the Ruins Grotto we threw kopeks up onto the stone ledges to bring us luck. Well, those with any aim could. I failed miserably and just managed to hit my fellow group members on the head with coins.

The tour finished off in Alexander Gardens. Unfortunately we left on a rather sombre note.

We came past the same spot five minutes later; the dog did indeed seem dead.

Despite that rather grim discovery,  we really enjoyed our Moscow Free Tour. It felt rather rushed, and the poor guide had a lot to fit in to the amount of time we had. We were lucky enough to be in Moscow for a good five days, so we had time to retrace our steps and look at these fantastic sights on our own terms and in our own time. If we were there for just a few days – like some members of our group were – it probably would have felt very hurried. But for an introduction to the city, and for the price of a tip at the end for our lovely tour guide, it was a great way to kick off our trip.

2 thoughts on “Mapping out Moscow”