It feels like we’ve been waiting all day for our train. Croatia has been plunged into a late-summer night, and it’s dark outside Zagreb central station’s large neoclassical windows. We’re looking forward to our beds. And, just a few minutes after our platform pops up on the notice board, our beds roll into the station. 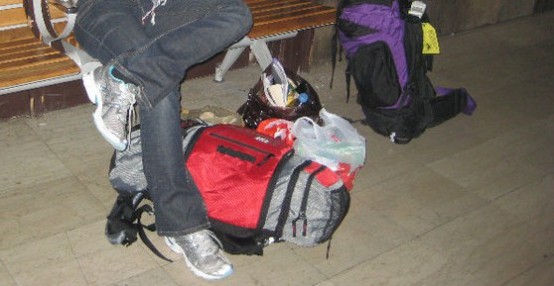 I’d never taken a night train before, nor had my travel partner. I knew it would be a little rough around the edges, but I still felt like I was in an Agatha Christie novel as we boarded the night train from Zagreb to Venice.

The room was cosy, to put it mildly. But by the time we boarded it was late at night, and we had been on our feet since our train pulled in to Zagreb early that morning. We’d been up since the crack of dawn to take a bus to Knin to change onto the tilting train up to Zagreb, and so a bed of any sort was an attractive prospect. As it was late in the day the guard had already laid the beds out for us. Only two. The relief was palpable. We were in a three bed compartment, that being the only thing we could afford as a supplement to our Inter-Rail tickets.

It may sound like a poor attitude, but we were thrilled that we didn’t have to share with a stranger. We were at the very end of a long, rather overwhelming trip. We just wanted to sleep, without the awkwardness of a fellow passenger changing into their jim-jams two inches away from us.

Despite our initial hesitation the beds were surprisingly clean. I twanged at the grey seat-belt looking contraption that dangled across the top bunk. Was that supposed to do anything? I decided I didn’t want to test it’s strength by allowing myself to be jettisoned off the top bunk at 100mph. My travel mate clearly had the same idea.

Once we had got into comfy clothes to sleep in, we settled down and took in our surroundings. I was quite pleased. It was relatively airy, and the rest of the passengers sounded to be bedding down in their own bunks further down the train. I had heard awful stories of oven-hot compartments and having to jimmy the windows open with a piece of string, of loud drinking parties making sleep impossible.

“Oh god, I feel like I’m in a coffin,” came my friend’s voice from below me.

It seemed that both top and bottom bunks had their drawbacks. I was worried about being slammed into the opposite wall every time the driver hit the brakes, and my friend was having nightmares about my bunk falling and squashing her to death.

Still, once we’d eaten the last of our snacks and learnt how the door lock worked we managed to get some sleep.

The next thing I remember is waking up to a banging at the door. Turns out that this train does a lot of border crossings and each of them contained their own brand of humourless grey-faced border control. Being woken up and turning the lights on to blearily find your passport isn’t conducive to a good night’s sleep. The only good thing about it was that I must have looked identical to my passport photo; pale, exhausted and half-dead.

The section of the trip across Slovenia was undisturbed, apart from one incident when I woke up to the scream of the train horn as we roared into a pitch black tunnel. It was like waking up in a hideous nightmare. By the time my heart stopped pounding we were coming in Ljubljana.

There’s something eerie and other worldly about being in a train station in the early hours of the morning. Especially watching it from a window of what it essentially your bedroom for the night. A few more passengers boarded, but the train didn’t move for nearly two hours. I tried to distract myself by lying on my front and peering out of the condensation-soaked glass at Ljubljana station. A group of men swaddled in football scarves were running for a train that they had no chance of catching.

Unfortunately, what I was attempting to distract myself from was becoming less and less avoidable. I was desperate for a wee. I have to apologise to the people of Slovenia that the only thing I did whilst in their lovely country was, well, wee on it. But to be fair to me, it’s going to inevitably happen when you park a train in the early hours of the morning for two hours and have a toilet that’s just a big hole in the train floor. Still: profound apologies to Slovenia.

The rest of the ride was thankfully more uneventful, bar our crossing into Italy. We didn’t respond fast enough to the knock at the door so the Italian border patrol thought it was acceptable to unlock and open the door themselves, and flick on the main light. Particularly unwelcome was the officer taking my passport photo and waggling his eyebrows at me: ‘ahh, Sophie’. Welcome to Italy.

The frustration melted away though when we woke up to the sight of water outside our window as the train crossed. It was the perfect introduction to Venice.

Apparently this particular train between Zagreb and Venice (part of the Budapest-Venice line) no longer runs, at least not the way it did when we took it back in 2010. It’s a huge shame as one day I would have liked to have gone back and relived it: a little older, a little wiser, and with a bit more money.

And it’s certainly made me want to go back to Slovenia and do more than just wee on it.